Women's Empowerment: In India and the U.S.

The Namaste Counsel is hosting a WOMEN’S EMPOWERMENT RETREAT with Sita Devi Dasi, September 21, as well as Community Kirtan on September 22. The retreat will focus on sisterly sangha and soaking up the prana in serene Wimberley. Sita Devi Dasi heads the Women’s Empowerment program at Radhanath Swami’s Govardhan Eco Village. The eco-village is an award-winning 100-acre spiritual sanctuary in rural India. The following summarizes her thoughts about women’s empowerment.

The Need for Women’s Empowerment in India

Women’s Empowerment is the need of the hour in today’s world. Not just in India, but all over the world. Obstacles that affect women in India are many, Sita says. Gender inequality, male domination, institutionalized inequalities, inadequate education, and even schoolhouses. In the end, limited job opportunities.

As a result, women need that extra support and encouragement. Therefore, women’s empowerment is often about women coming together. Women helping each other financially, emotionally and socially. In the cities, the women at least have better opportunities, a support system and access to a viable education. However, rural women are the most underprivileged and neglected. Usually, they are not literate. Consequently, there is a greater need in rural communities for women’s empowerment programs.

Women’s Empowerment in the West: Me Too

There is a need for women’s empowerment in the U.S., too. At first glance, women appear more privileged and have greater resources and opportunities in the States. However, emotionally and socially, women are still exploited. The #MeToo movement calls it out. There is mental, physical, and sexual exploitation which American women face at the hands of the opposite sex. Women are not given the merited respect or dignity. In the workplace, they often have to outperform their male counterparts, and then are victimized by sexual harassment.

This greatly undermines a woman’s confidence and self-esteem. She feels lost and discouraged. Therefore, it’s about time for women to come together, support, and speak out for each other. Give one another mental and emotional support to fight together and command respect and dignity.

Furthermore, women, when spiritually enlivened and realized, can become the true leaders and role models of society.

As a case in point, consider Tulsi Gabbard. This 2020 U.S. Presidential candidate served honorably in the military. She was raised in, and continues to lead, a highly spiritual life. All the while, maintaining a high degree of femininity.

We can all benefit from spiritual women’s empowerment.

Realize one’s true spiritual potential. Use one’s feminine power to come together and create a powerful force that can bring transformation in the world today. Women can support and pacify each other as no other man can ever think of doing. Instead of wasting one’s time competing with men, women should come together, strengthen their true feminine qualities and work productively.

All scriptures in the world speak about the exalted position of the woman. Great saints and seers emphasized this.

But, still, women today struggle to get dignity and honor.

Worse, there is a growing trend of crimes against women. Rapes and assaults are common news in every newspaper. This is due to moral and spiritual degradation. Western culture focuses on exploitation and a sense of enjoyment. Hence, men see women as objects, and not as people.

The need is to awaken and educate women spiritually. Then, women can impact society and hopefully bring forth a generation of men who respect all women and not see them as objects for enjoyment. 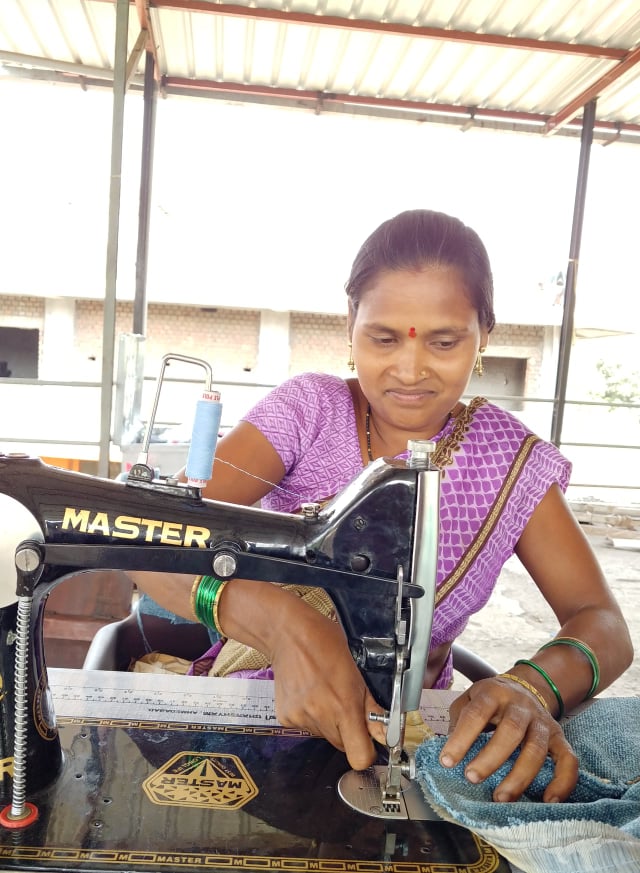 A trained dentist, Sita launched her first free dental clinic six years ago. She was part of the community living and working at Govardhan EcoVillage, several hours outside of Mumbai. Here, she saw the dire need for dentistry— and more.

Sita met with the village women who were all farmers. First, she chatted with them. She listened to their stories. As a result, she realized that they needed so much help. Both financially and socially. They were a very neglected section of society. These rural women had minimum means, and resources. She was inspired to make a difference in their lives. That’s how the Women’s Empowerment and Skill Development Program connected to the Govardhan EcoVillage was launched.

Another important aspect was to teach them income-producing skills. Among the areas that took off were sewing, handicrafts, incense and candle making.

Next, Sita established self-help groups in each village. Groups of 10 women opened joint bank accounts. More importantly, they learned the importance of saving money and helping each other financially.

The women of Dhusal Pada village are relegated to work in the fields and stay at home. The first year, Sita’s program taught them to paint terracotta lamps. Most were holding brushes for the first time, as they had never gone to school. With practice, they painted with such expertise that their work was so appreciated — and purchased. Now, they have a steady source of income from their handicrafts.

That has made a great difference among the men of the village, to boot. The men now respect the females as earning members of the home. More importantly, the women feel more confident and encouraged.

While Sita has invested her time and energy with this program for the last six years, she’s also reaping many benefits. She says she feels blessed and privileged to be part of the women’s empowerment movement. Moreover, she considers she has benefitted far more than them. Now, she has a higher purpose in her life. What’s more, she feels closer to her soul, and God. Sita recalls Mahatma Gandhi’s words. “The best way to find yourself is to lose yourself in the service of others.”

Americans can reach across the ocean and help empower these women in India. Sita invites Westerners to visit the rural women of India. Connect with these ladies. Sit with them. Sing with them. Dance together. Encourage them by making them feel valued and appreciated. By doing this you too will feel valued. Perhaps, you, too, will find the real purpose of life.

If traveling to India isn’t on your agenda, support Sita’s initiatives. There will be at least two “trunk shows” in the Austin/Hill Country area from September 20-22. Contact Deborah for viewings of the women’s hand-crafted items.

Finally, Sita will be coming to Wimberley for a women’s empowerment boost in Texas. Contact Deborah for details, or book the Women’s Empowerment Retreat at The Namaste Getaway on September 21, and Kirtan at Orange Moon Yoga on September 22.