Yoga for Men: Yoga and the Y Chromosome

One of my mantras: Yoga is for Everyone.

When people who don’t fit the Lululemon mold are in my classes, my heart smiles. Many of us have ingrained images of who does yoga and what yogis look like.

I never thought I fit the mold, even though yoga has been a part of my life for nearly four decades. When a friend casually told me that I had the body of a yoga teacher, my response was shock.  In yoga teacher training, I was surrounded by mostly young tattooed women with long lanky bodies. I was one of just two that were past our mid-life marker, and one of two whose marker on the scales was not at or below insurance companies’ standards.  Although the two lead trainers were male, there were only two male students within the sea of women. Of those men, one was a catholic priest — another shocker.

Of course, the tradition of yoga was kept alive for thousands of years through those with the Y chromosome. When I was in India for Ayurvedic training, there was a group of 125 teacher trainees at my ashram.  Of the Indian nationals, the split was fairly even, or a bit more skewed male to female. Not until the early 1900s were a few women welcomed by the gurus to spread the learnings to the Western World. And now, imagery of yogis has toppled to favor the agile young peace mamas and a few gymnast-type men on the mat with bendy bodies.

When I was working on a yoga video, I aimed to include diversity to highlight yoga for men — and everyone. I invited one student of mine that looked like a heavyweight boxer. He had a beautiful yoga practice, modified to fit his body type, and I wanted that to be recognized.

Yogis are of all body types.

Alexander Hutchison, Ph.D., looks like he could go eight rounds in a ring with pretty much anyone. He’s the owner of Tejas Fit, a San Antonio facility for nutritional consulting, personal training, cross training, and yoga.

“As a lifelong competitive athlete in swimming, water polo, triathlon, ultra-marathon, and boxing, I was amazed at how taxing yoga was for me,” notes Dr. Hutchison.  “Men tend to shy away from yoga. But, many professional football and basketball players have used yoga as part of their training routine, particularly to improve flexibility and balance, two important characteristics of any athlete.”

The benefits of yoga, and yoga therapy, in particular, are endless.

“As a research scientist, I am fascinated by the physiological benefits yoga provides,” adds Dr. Hutchison.  “The scientific literature unequivocally shows that yoga can reduce the level of stress hormones in the blood while increasing the levels of at least two beneficial natural pain killers called endorphins and endocannabinoids.” 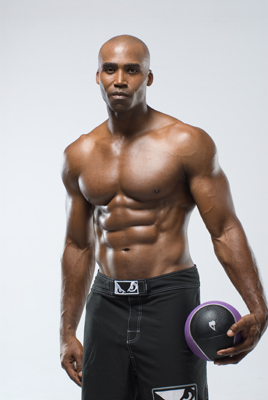 From the time he was a young boy, he wanted to be a football player. Growing up in Texas, he was in awe of the Dallas Cowboys. He had never heard of Yogananda, Sivananda, Satchidananda or any of the other great yogis that spread the wisdom of yoga to the west.

After a football injury left him in a state of paralysis for six months, when he was just 31, he switched playing fields. Now, he’s a serious yogi. Not just one that takes classes to cross-train or to chill. He’s a certified master yoga instructor who has found incredible inner and outer strength through the wisdom of stira sukha asanam.

“Now I have the power and strength from realizing I can transform energy that I tapped into, in a sense of something that works in a whole different way,” he explains after one of five yoga and meditation sessions he led at Wanderlust Festival in Austin.”

As a pro football player, Keith lived the gladiator mentality. Now, he takes that greater strength to other men that can relate to him, especially veterans and athletes.

“I created an amazing friendship and tag team with Congressman Tim Ryan. We have a lot on tap. I look at athletes and vets and connect to the male perspective which creates a whole new paradigm for what masculinity is.”

We tend to see men, and football players in particular, as being solid as a rock, physically, and at times with a fortress surrounding their emotions.

“The interesting and fortunate thing for me, is people view linebackers as a masculine entity. We are walking around with all this armor. I share my vulnerability and that gives people a safe space to share.”

Keith’s meditation class began with a recording by OSHO. Then, he asked the attendees to pair off and disclose what patterns in their lives need to be shed. Changing our samskaras. This caused a few hugs, and tears.  It also connected everyone in the room. He knows that yoga is the answer to health and happiness.

“Imagine that next place. In all aspects of our lives. To take that next step. Assessing the possibilities to be in the ‘zone.’ Where there’s no good or bad. You have an intention. It just is.”

For those weightlifters or boot campers who may have never tried yoga or meditation before, Keith urges them to give it a shot. “If not now, when?”